In a victory for public safety, our economy, and human dignity, the House passed H.4461 – An Act Relative to Work and Family Mobility. This legislation allows anyone in Massachusetts to apply for a driver’s license, regardless of immigration status. The reality is that many undocumented immigrants currently living in Massachusetts are driving now, and no doubt will continue to drive. We need to ensure that these drivers have standardized identification, access to insurance, and are required to have appropriate road safety training. Unlicensed drivers on the road make us all less safe. I have long supported and co-sponsored this measure and am pleased to see it pass the House with a veto-proof majority, making Governor Baker’s veto pen irrelevant.

In order to apply for a driver’s license, all applicants will have to produce at least two documents to prove their identity and date of birth. For those that worry about undocumented immigrants circumventing other laws related to lawful residence, those who cannot prove lawful presence will be ineligible for a REAL ID, the new federally required form of identification. The legislation also prohibits the RMV from disclosing personal information about applicants, except those authorized by the Attorney General.

There are nearly 182,000 undocumented immigrants in Massachusetts, about one-sixth of the state’s overall immigrant population, and 78% of them are people of color. About 32% work in the service industry, and 31% work in management, business, science, and the arts, and more than one-third of these individuals have a bachelor’s degree or higher. In 2016, undocumented immigrants contributed $8.8 billion to the state’s economy and paid about $184.6 million in state and local taxes. These positive economic statistics related to immigrants and their impact on the economy are not only true here in Massachusetts, but all around the country, as supported by many studies.

While I am a big proponent of public transportation and biking, driving is essential for many people in the Commonwealth. That may be true because of where they live, the hours they work, or the increased health risk that comes from taking public transportation during a pandemic. We must ensure that this population has access to driver’s licenses, not just because it is the right thing to do, but also because it will generate state revenue. Newly licensed Massachusetts drivers will generate about $5 million in initial fee revenue for the state within the initial three years of the issuance of licenses, inspections, and other services. This measure will also create $5.1 million per year in additional tax revenues once the law is fully implemented.

Many in law enforcement support this idea. The Massachusetts Major Chiefs of Police Association, 42 Police Chiefs across the state, 8 Sheriffs, 8 District Attorneys, and Attorney General Maura Healey all support this legislation. Police officers believe that the passage of this law will make the identification process easier during traffic stops and could help avoid unnecessary negative interactions, thereby building trust between communities and law enforcement. With more trust, we are likely to see crimes that have previously gone unreported, like domestic violence, get reported and prosecuted. Victims or witnesses to crimes will know that if they are asked to show identification, they will be able to do so without risking deportation simply for interacting with the police. 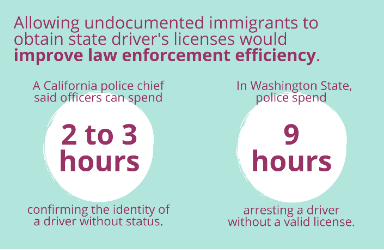 In addition, after similar bills were passed, California saw a 10% decrease in hit and run accidents, and Connecticut saw a 9% decrease. When undocumented drivers are in accidents, they are more likely to stay on the scene if they have a license because any ensuing interaction with law enforcement is less fraught for them. Increased access to driver’s licenses also means increased numbers of motorists with car insurance. More insured drivers mean accident costs will be split between drivers rather than falling solely on the insured driver, and that means lower insurance rates for everyone. 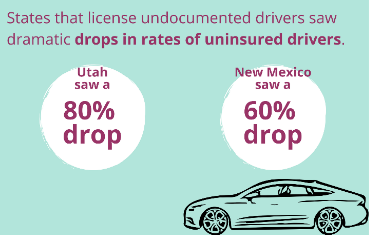 Again, allowing anyone to apply for a driver’s license is both a public safety issue, a boon to state revenue and the economy, and a matter of advancing basic human rights. The passage of this legislation also improves racial equity in Massachusetts, as many of our immigrants are persons of color.  The bill now goes to the Senate. If this idea ultimately becomes law, Massachusetts will be the 17th state in the nation to do so. I will continue to push for the passage of the Work and Family Mobility Act this session. For those curious to read more about this policy area, the Massachusetts Budget and Policy Center wrote a paper which you can read here.