I am pleased to report that we are expanding access to the ballot by making permanent a series of important reforms we passed during the pandemic in 2020. These reforms led to record-shattering turnout in both the primary and general election in 2020. In fact, those who live in our communities can take heart that in my State Representative district we had one of the highest turnouts in the entire state during the 2020 pandemic-era election.

But we are not just making permanent those important 2020 reforms, we are doing yet more to improve our election system. Last week we voted to implement the following reforms:

• Making permanent no-excuse vote-by-mail.
• Expanding early voting by mail and ballot return drop-boxes.
• Allowing voter registration, including through automatic voter registration (AVR), up to 10 days before an election, expanding it from the current 20 days.
• Increasing accommodations for those with disabilities, including submitting ballots electronically.
• Assisting local election officials and municipalities through detailed instructions and by removing certain costs.
• Requiring correctional facilities to provide assistance to inmates with registering to vote and voting by mail.
• Requiring the Secretary of State to enact a few reforms, including increasing digital access for ballot requests and running an informational campaign about the provisions of this bill.
• Requiring the Secretary of State to implement a multi-lingual public information campaign about early voting, including outreach to minority communities.

During the debate on the VOTES Act, there were amendments to add Same Day and Election Day Voter Registration to the bill, an issue I heard from many of you about. I support Same Day Registration, both because it is a means to expand voting rights, but also because of the times through which we are living. After the January 6th insurrection and the continuing efforts to limit voting elsewhere, here in Massachusetts we need to do everything possible to expand the franchise. I was also mindful that the US Congress recently had failed to pass the John Lewis Voting Right Act.

The feedback from municipal clerks, who run our elections in cities and towns across the state, indicated that implementing full Same Day Registration right away (meaning people could both register to vote and vote during each day of early voting) was not at present a workable solution.  So I was in support of an amendment that is a form of same day voting known as Election Day Voter Registration (meaning that even after the end of the regular voter registration deadline, people could both register and vote on election day). It was a smart and thoughtful compromise that would put us on the path to full same day registration. However, during the debate on the issue, a further amendment was offered that would have required the Secretary of State to conduct a study on Same Day Voter Registration and its effect on municipal budgets and staffing issues.

While this provision was not included, we must not lose sight of the big steps forward contained in this bill. It will codify many groundbreaking and important reforms that have proven to expand voting opportunities significantly in the Commonwealth. The bill will now be sent to conference committee, where differences between the House version and the Senate bill will be worked out. With this legislation, we take another step to preserve and protect our democracy and expand one of our most basic civil rights – the right to vote. 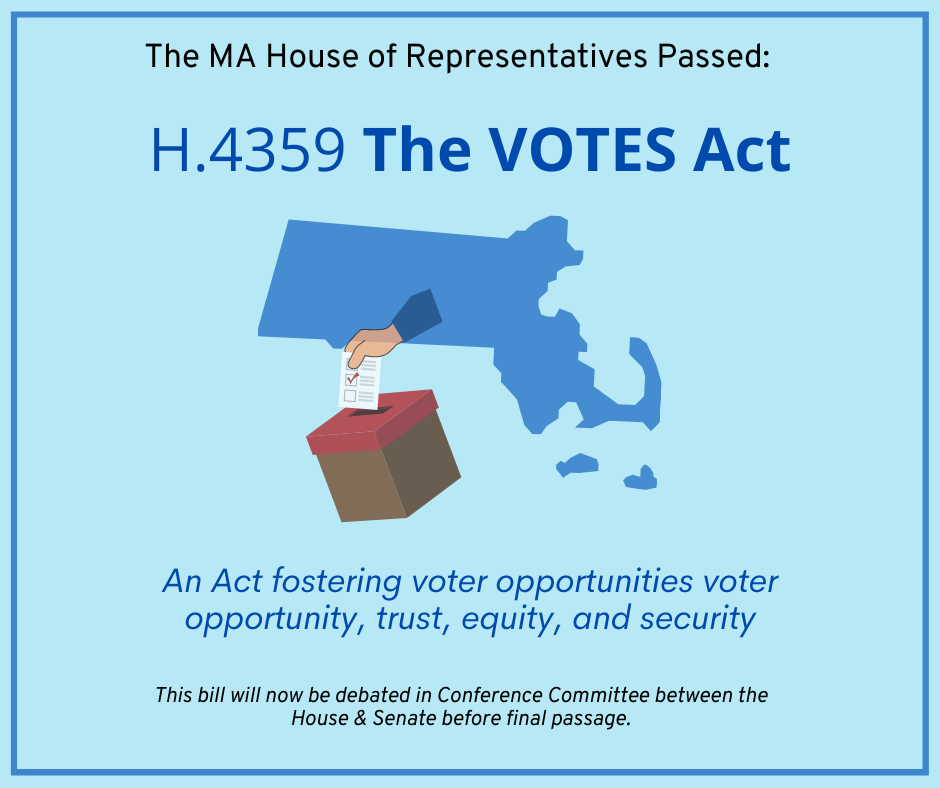 “The right to vote is precious, almost sacred. It is the most powerful nonviolent tool or instrument in a democratic society. We must use it.”
Congressman John Lewis