Virtual Tour of the State House

The new State House was finished in 1798 and has undergone two main expansions since then. The original part 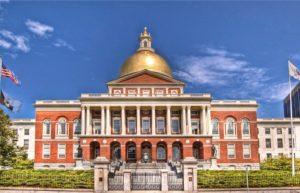 of the building was built by Charles Bulfinch, and is most notable today for its gilded dome. The dome was originally wood, then covered with copper by Paul Revere. The dome was first gilded in 1874, then temporarily painted grey during World War II to protect the city from potential air attacks. The center of the dome is used to mark the center of Boston, meaning a sign that reads “10 miles to Boston” is measuring from the sign to the center of the dome. The Senate chamber is also directly below the dome.

The second floor of the State House is partly a museum and ceremonial areas, housing many pieces of art and artifacts from our state’s past.

is home to many commemorative pieces of art. This statue of George Washington was commissioned shortly after his death and done by a British sculptor. He is depicted in the neo-classical style, wrapped in a Roman style robe and holding a scroll.

Also in Doric Hall is this painting of Lincoln. It is was purchased in 1909, painted by a Malden resident who started painting portraits of Lincoln during the Civil war. His arm is held behind his back, in a posture commonly used to reduce the cost of portraits. Artists would charge more for drawing limbs, as they were highly detailed and time consuming. This practice is where the saying “it cost an arm and a leg” originates.

In a corner of Doric hall is this plaque, featuring the seal of the last ancestor of George Washington to be born in England. The left half of the seal is that of the Washington’s. It features three stars above horizontal stripes. This pattern is still used as the flag of Washington D.C. and is where the concept of stars and stripes on the American flag originated. 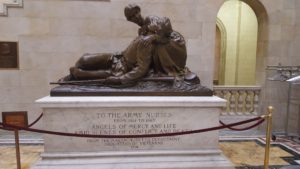 Next to Doric hall is Nurses hall, built in commemoration of the nurses of the civil war, and stands as a tribute to all nurses. The hall especially recognizes the contributions of Dorothea Dix, a mental health advocate who created the first mental asylums and served as Superintendent of Army Nurses during the Civil War; Louisa May Alcott, author of Little Women and a Civil War nurse; and Clara Barton, who brought the Red Cross organization to America. 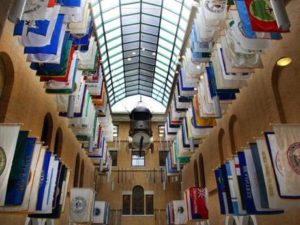 Still on the second floor is the Great Hall of flags. In it is a flagpole for all 351 towns and cities in the Commonwealth, arranged chronologically by their establishment. Some poles are bare as not all municipalities have flags, and not all that do submit a flag for display. The room is mostly used for receptions, like a function hall.

anging in the middle of the Great Hall is a contemporary art piece from the late 1980s. It is a modern sculpture incorporating elements of architecture frequently seen around New England: clock towers and domes. Personally, I think it looks like R2-D2.

On the third floor near the entrance to the house chamber is this statue of Governor Wolcott, who is credited with keeping the capital in Boston, against some advocates who wanted it moved to a more centralized location in the state. 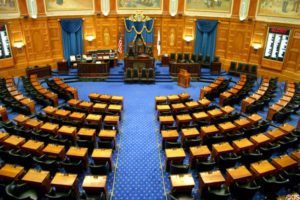 ouse chamber is up on the third floor and can be observed from the gallery on the fourth floor. In the House members vote electronically and votes are displayed by either a red or green light next to the corresponding names on the wall. 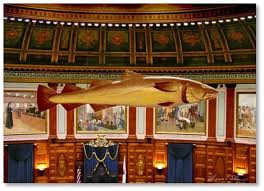 Haning over the House chamber is the Sacred Cod of Massachusetts. It has followed the legislature since the Old State House and was moved to the new building upon its opening in 1798. The cod was gifted to the House by Representative John Row, and was hung in what was at the time the House chamber. The cod wasmoved to the current House chamber in 1896 when the body moved and was undisturbed until it was stolen in 1933. This event became known as the “Codnapping.” Members of the Harvard Lampoon cut the cod down and snuck it out in a flower box. Without the cod, a few legislatures refused to hold session, and a massive police search ensued. The police dragged the Charles river, and searched a plane in New Jersey that an editor of the Lampoon was on. The cod was anonymously returned by two men who met with a Harvard official in woods in West Roxbury a few days later. The cod still hangs over the chamber, only now a few inches out of reach.